Interview with There Is No Sin in My Body

Sunday May 10, 2009
Our resident humorist Margaret Lyons avoided interview conventions today when she interviewed There Is No Sin in My Body’s Troy Keiper. 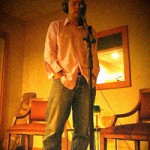 CR:  I’m talking to the front man of There Is No Sin in My Body, Troy Keiper.  So, what’s the origin of your band name?
TINSIMB: [silence, blank stare] I’m not sure how to answer that. Why are you lauging?

CR:  Why are you being all Billy Bob Thorton?
TINSIMB:  [more of the blank staring]

CR:  Are you ready for some thinky questions?
TINSIMB:  OK

CR:  I’ve listened to your CD and it’s sad….are you a sad person?
TINSIMB: Generally, I guess. Do you think so?

CR:  Why? What makes you sad?
TINSIMB: [laughing] This interview?

CR:  [deep breath…a stare!] I’m sitting here with Troy Keiper, the voice of There Is No Sin in My Body.
TINSIMB: See?

CR:  Well you are….and you play all the instruments too.
TINSIMB: Yeah, actually when I was a kid, I started out playing drums. I was probably ten. I play guitar mostly now.

CR:  And you play all the instruments on this album?
TINSIMB: It’s basically a solo project but I didn’t want it to be named after me, so I came up with something else.

CR:  The name of your band…where did that come from? It’s crazy.
TINSIMB: It’s a quote that was directly lifted from a phrase in the Papyrus of Ani. Probably the most pretentious reference I could have come up with. It has to do with being judged…at the point when you’ve died. In this case, one of the characters, Ani, makes a statement about his purity….and that’s where I got it.

CR:  What’s it have to do with you?
TINSIMB: It seemed relevant.

CR:  Do you feel judged?
TINSIMB: No, but the lyrics have to do with judgement and pain and other things that relate to living and dying.  Larger structures, not little things.

CR:  So, basically the concept is, you beating yourself up for failed relationships.
TINSIMB: No. It’s something like conceptual therapy.

CR:  I’m not going to lie. I’ve listened to the entire album.
TINSIMB: You have?

CR:  And it doesn’t feel therapeutic. There’s no sense of hope at the end.
TINSIMB:  Sure.

CR:  It’s pretty much a bummer from beginning to end.
TINSIMB: That’s right.

CR:  Even though there are catchy beats and I found myself tapping my toe often.
TINSIMB: Well, at the end of it, you’re judged but that doesn’t necessarily mean that you’re going up or down. You’re getting weighed and judged by the people around you.

CR:  But it ends with no solution. No hope.
TINSIMB: Whether I’m happy or not does not change the songs themselves.

CR:  What I’m saying…at the end of this CD…you’ve compiled all these songs…ending without answers. Have you now exercised your demons? Was it cathartic in that way for you personally? Are you now ready to write silly, happy music?
TINSIMB: To do that you’d need to say that this process of writing music was a phase. It was something that you went through and now you go back to being yourself. I would argue that the content has been omnipresent since I was a kid. So it probably reflects more a part of me than any real-world relationships that I’ve had.

CR:  Were your older songs…before this album…have they always been sad? Is sad your style?
TINSIMB: No…I think you’ll find that many of these songs are actually more angry than sad.  There’s a bit more from the narrative voice than there is from the perspective of someone that is just depressed.

CR:  New business….you’re not touring, currently.
TINSIMB: No there are no tours.  In fact the only promotion I’m doing is trying to get the album placed in weird locations. Ideally it would be…to put in the hands of people who want to listen to it, obviously…but it would be set to things I can’t quite conceive of at the moment like a scene in a movie or something like that, so I’m not really trying to sell a product or performances. That’s not the goal.

CR:  Interestingly, you haven’t performed since that incident in 2006.  It was purported to have left you pretty banged up.  Do you think there will ever be a day when you’ll perform live again?
TINSIMB: It’s not easy to get your entire body through a stain-glassed window but I did it. The idea that I would continue to perform in churches is…probably not in the cards.

CR:  So don’t look for your schedule on your MySpace page?
TINSIMB: Yeah, churches pretty much know that, come Sunday, it’s lock-down time. I will not be performing anymore in those types of situations. Although I did just read an article about this interesting thing called “house shows.”

CR:  Oh yeah…
TINSIMB: I’d never heard of that before.

CR:  Does that intrigue you?
TINSIMB: Well, actually, what I was hoping to do was perform on the set of the show House.

CR:  Oh, I think you totally misunderstood the gist of that article.
TINSIMB: I’ll be working on that sort of thing….and they might not like it….and I might get thrown out of there just like I did out of the Episcopalian Church last week, but they will be entertained for about 30 seconds…

CR:  Okay….you know what I think is interesting…I love the way you describe your process.  Could you tell me again, just for example, pick a song….what is the process for writing that song? I’m not talking musically so much as lyrically.  Seemingly, there’s a story being told, but you’ve described a process that is counterintuitive to that notion. Do go on…
TINSIMB: The lyrics come from little phrases that pop into your head. You’re doing the dishes…

CR:  Ha!
TINSIMB: …you’re doing the dishes…running around doing something…and there’s a phrase that come into your head so you write it down quickly. In some cases it’s one line or two lines or a paragraph and usually you’re in panic mode because you can’t remember exactly what it was…so anyway, you don’t have any real melody.  It’s something that is destine for a book and when you finally sit down and think about how the rest of it’s going to go, you’re still not thinking about music. Usually, based on the first few words in the phrase, there’s a scene that’s happening…it’s not necessarily of my choosing…it’s not necessarily related to an event that happened or anything that is happening around me…it just forms itself. Then you have the rest of the words, which, in some cases don’t happen for weeks or months later. Often what happens is you’re playing with a instrument…you’re playing the guitar…and all of a sudden some words start to come back and you pick up some lyrics that you hadn’t really set music to, and in some cases I shift the lyrics around from song to song because the song itself provided the framework, but I could have been more concerned with the mood I was in at the time or how much more I could flesh out the song.

CR:  And is it true that sometimes you make up words just because you like the sound?
TINSIMB: Yes. I’d like to claim that that is some sort of thing that I trademarked, but having been an English major, and finding that it was one of those things that Shakespeare and some writers were known for…they’d take a word and they’d twist it to fit their own purposes, so sometimes in course of recording a song there’s not a good lyric to go in a certain place…you can modify that with fake words.

CR:  Let’s take another song, for example…the one I insist is inspired by me. It starts out…you’ve been in Europe for a week…
TINSIMB: Yes, what about that?

CR:  If someone was to say, “what’s that song about?” your first answer is going to be, it’s not about anything, right?
TINSIMB: Well, it’s about things, but the things are not literal. you can’t say, okay, this song is talking about you or one person or one event because even though you could have inhabited one sentence or two or the overtone itself could have come from a relationship with you or I could have been having a bad day that day…all of those inspirational things are flavors. Little things you’ve stuck in.  It’s like if you have a palette and you’re mixing up some colors and get one almost by accident and you think…yeah, that’s what I was thinking…and then it just happens.  It wasn’t deliberate…you didn’t say, fuck, I need some more burnt umber in that….you do it almost instinctually and in some cases it works, and in some it fails.

CR:  So what you’re saying is that you’ll never write a happy song about me?
TINSIMB: I knew you were getting to that.  I can write happy throw-away songs like no one’s business, but the songs that come out of my head…I don’t control them. They are there on their own, so the idea that I can choose whether or not they are happy or sad doesn’t really work. I can be very happy and write a very depressing song.  They are not indicative of my mood. In fact, when I’m depressed, or sad, or upset, those are the times when I am not as creative. It’s the in-between times that I write. I tend to play guitar more when I’m depressed…but that’s it.

CR:  You’ve been in bands….but most recently, people have likened you to Iron & Wine, or…
TINSIMB: I think that’s because people don’t know what to make of me…they try to pigeon-hole me.  The reasoning for that is they think it’s acoustic brooding music.

CR:  What’s interesting is that a lot of moody or broody musicians…they have a shtick….it’s like very similar melodies with different lyrics…but your songs sound very different from one another.  Is that intentional or do you have a wild case of ADD?
TINSIMB: I do have ADD….part of it is the time span…part of it is the emotional range.  A lot of effort was put into picking what songs would fit together in a way that would make it more interesting than one extended length dirge or a 42 minute rave-up. There’s no reason to stick to one particular thing unless you thought the listener would shut it off.  But that all came after the fact.

CR:  That’s very interesting….so….umm….considering where you’ve come from and where you’re going…do you think you’ll ever own a pair of capris? man capris?
TINSIMB: What? Pants? No. Why?

CR:  I’ve noticed a lot of your songs are about feet….
TINSIMB: Okay…this interview is over.