There Is No Sin 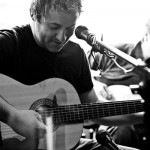 In 2008, Troy Keiper began producing solo recordings under the moniker of “There Is No Sin in My Body.” The result was an eponymously titled CD in 2009. Its stripped-down instrumentation and dense song structures quickly developed a following and the limited edition release sold out within weeks of its release.

Originally from the Pennsylvania/New Jersey area, the former skate punk and guitarist of band Einstein Cried Fear, grew up on a steady diet of classical, punk and 70s operatic rock. A multi-instrumentalist, he studied with two legends of the Delaware Water Gap jazz scene, Butch Tucker and Marty Wilson.

The band’s heralded 2011, We Are Revealed, was recorded with producer/guitarist Pete Morse and singer Leslie Dean. The touring band includes Tim McNamara and Al Gingrich. TINS has a third, long-awaited record slated for 2019.

In 2001 we produced a limited-edition set of handmade CD-R’s by the two man electro-electronic band Pola.

The most popular disc was a five song EP titled “Regrettable.” We are reissuing this EP in electronic form along with some new documentation on its making, along with updated bios on the artist.