Portland has a few exceptional talents and Will Gattis is one of them. Most recently performing as the Gattis Band, his solo stop at yesterday’s Hell No On 1 Benefit Concert was just, plain crazy. 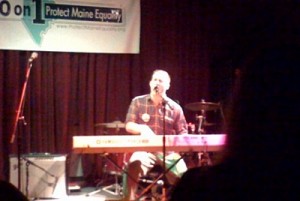 We’d love to see  him put out a solo album featuring just him and his keyboard. Maybe record each track in single takes. Whatever it takes to let the honesty of his songwriting shine.

Will’s MySpace mentions Ben Folds as an influence and as much as the analogy may fit, it’d be an injustice to compare the two. Numerous plaintive singers play piano, but Will’s songwriting and creativity have a genuineness that others lack. Excepting maybe Bo Burnham.